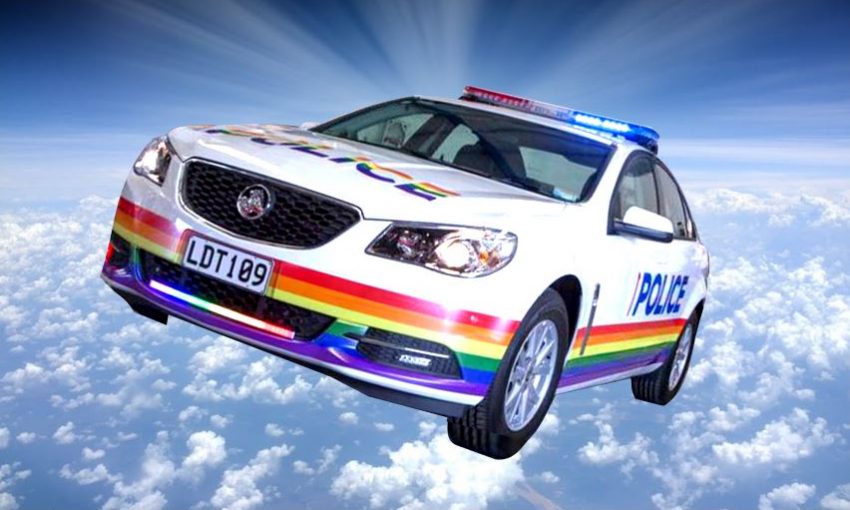 New Plymouth traffic offenders must be loving the fact that the Taranaki town’s boys in blue have gone a bit soft. Not only are they being let off for clear traffic infringements, they are being given a bbq’d snag in bread lovingly prepared for them by the good buggers who make up their local Community Patrol. (The vegans must be sooo triggered right now!)

It seems that the local Plods have had a weekend of checkpoints to pull over people who they were observing using their cellphones while driving or sitting at an intersection.

Normally this offence would garner you an $80 fine and twenty demerit points, but for some reason, the local officers were instructed to only issue warnings, along with advice on how to connect their phones to their car’s Bluetooth systems, or where to purchase an aftermarket Bluetooth if they didn’t have a sufficiently spec’d vehicle.

But really, is there any point? I don’t know why these little campaigns come up from time to time. I guess someone from Public Relations in Bullshit Castle has got to come up with a reason to keep getting paid.

We used to get all sorts of ridiculous schemes forced upon us. I think the worst one was probably when we were instructed to ‘catch people who were being good’ by wearing their seatbelts, and reward them for complying with that most basic of traffic laws, by handing over a carnation to them!

You can imagine the ridicule received trying to hand over a pretty yellow carnation to Bob the burly builder in his ute. Naturally, it resulted in only lady drivers being caught ‘being good’, but the happiest of all were the coppers better halves, who received massive bunches of flowers after work each day from their loving blokes, who were actively avoiding doing what they considered demeaning.

Probably the best one involved officers being instructed to hand out little slim chocolate mints to everyone who wasn’t over the alcohol limit. We literally had tens of thousands of these things to give out. They came out in boxes of 250 and oh boy did we chew through a lot of boxes, no copper bought chocolate for months after.

The moral of this story, of course, is that they will never get officers invested in giving treats to offenders, let alone people who are doing what they are supposed to be doing anyway.

And of course, this type of education never makes the slightest bit of difference to the offending rates or crash data. There will be a very small halo effect around the checkpoint, and one or two of those warned may change their habits long term and use their phones less while driving, but most will just take their sausage and will lose a little respect for the Police.

There have been many many studies over the years in relation to the efficacy of issuing warnings rather than tickets, and without fail they show that warnings don’t work.

The only thing that changes people’s habits in the long term is penalties, and over time, social conditioning.

Sure there will be people who think that this type of thing helps grow support for Police simply because they find it fun or because it purports to show a kinder face of the constabulary.

But the reality is, it is generally only law-abiding people who think like that. The habitual offenders just laugh at the ‘hugz and feelz’ antics of the Police, their absurd dancing videos, the playing guitars with trespassers etc., and it simply reinforces their view that the Police are not worthy of their respect. Their own little version of Taqiya I guess, they take the snag then slag the cops off to their mates.

Many people would say that the Police need to be feared in order for them to adequately control the populace. I think there is a fine balance of fear and goodwill required.

The goodwill helps with the good guys, and when you’re getting a kicking at the side of the road it is the good guys that will jump in and help you out, but it is the fear that keeps the bad guys on their toes.

It is usually the fear that stops young offenders becoming old offenders, and it’s the fear that makes the bad guy think twice about giving you that kicking at the side of the road.

And I think it is the fear that is missing at the moment.

We Don’t Know How Lucky We All Are

Ladies This BFD Nightcap Is for You

How To Tell If We’re Beating COVID-19

Australia Must Have a ‘Long, Hard’ Look at Further Relations with China

We Don’t Know How Lucky We All Are

How Does This Clown Keep His Job?