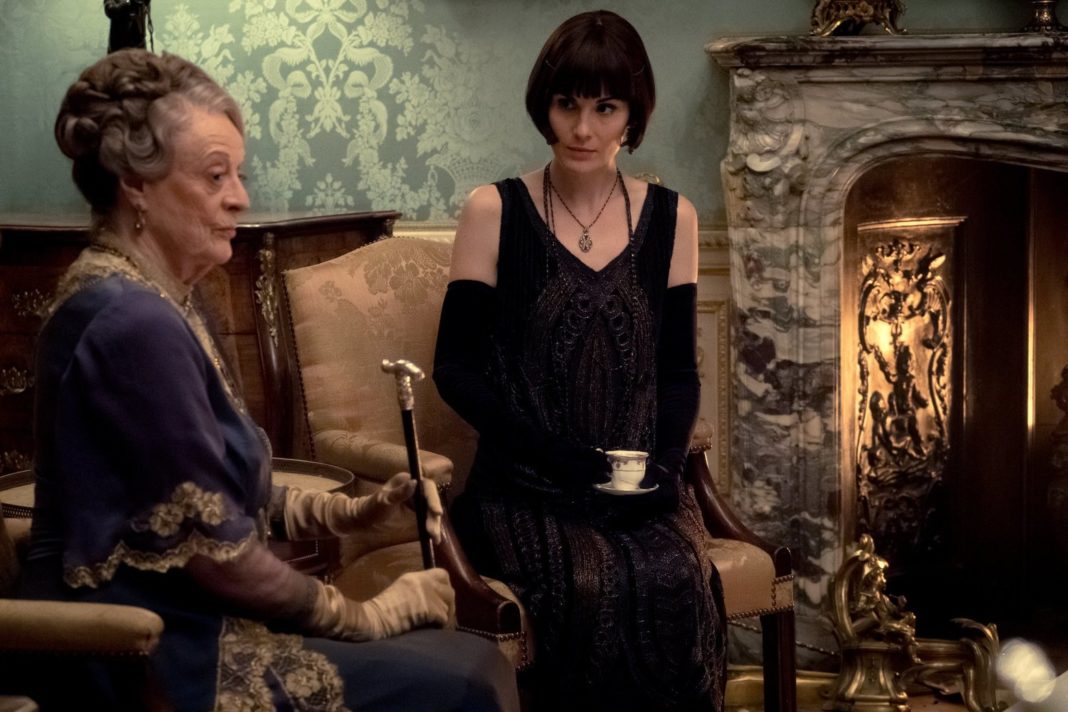 I have never watched a single episode of the TV series Downton Abbey, which sees its cinematic offspring grace our movie houses this week. I have always figured it was the kind of Merchant Ivory/Brideshead Revisited bollocks, only popular with nanas and repressed homosexual antique dealers.

But when The BFD offered to fly me to the London premiere on an all expenses paid junket, my reservations magically evaporated. At last my school counsellor would be proven wrong; writing would get me somewhere. On the red carpet with Maggie Smith to be exact.

And it had only taken 20 years.

Arriving fashionably late, I quickly downed three glasses of chateau de posh vino, grabbed as many canapés as I could carry and squeezed into a seat between two middle aged aristos with the wasted countenances of men who had spent most of their lives waiting for rich relatives to die. The lights dimmed and, through the magic of cinema (and the vino), I was transported to post-Edwardian England.

What a revelation. Over the next two hours I was treated to a joyful, wholesome, optimistic and, yes, conservative slice of escapism. A better class of escapism though, without any bloody superheroes (thank Christ) or anyone wielding a light sabre. The plot of the movie is wafer-thin with the main story thread being the imminent arrival of the King and Queen at Downton, and the tension being whether the house staff (them ‘below stairs’) will be side lined by the staff of the visiting royals. It’s not exactly The Godfather: Part Two. The subplots are just as trivial, following (I imagine) the usual run of a TV episode.

The actors will be familiar not only to Downton fans but anyone who remembers TV from before the catastrophe of reality television. Jim Carter as the dignified Butler, Carson; Hugh Bonneville as the patriarch, the Earl of Grantham; and Penelope Wilton as Isobel, whose sarcastic exchanges with her sister, played by Grand Old Dame Maggie Smith, steal the show. The set dressing and costuming are magnificent and made even me, a lower class oik from West Auckland, long for a time when people knew which spoon to use with the soufflé and dressed for dinner even when they weren’t leaving the house.

Apparently, I’m not alone. Downton Abbey the TV series has been a notable success, oddly enough in the US and, even odder, among the young.

Even stranger, it stands out in today’s pop cultural landscape as deliciously ‘unwoke’. Understandably, that is, given it is the brainchild of Julian Fellowes, a conservative peer of the House of Lords. Examples of socially conservative ethics abound in the movie. An heir to the throne, pondering her unhappy marriage, decides not to leave her husband, and recommits herself to her royal duty. A bolshie kitchen maid first expressing dissatisfaction at ‘Kings and Queens’ and her diffident fiancé comes to accept both, announcing at the end of the film she is finally ready to plan her nuptials. An Irish republican denounces armed insurrection, declaring himself a ‘law and order man’.

Perhaps we shouldn’t be so perplexed by its popularity. In a time of moral relativism, ethical codes, even quite rigid ones, gleam when contrasted with the grubby modern alternative.

As if all this were not enough to outrage woke wankers, there is also a Brexit subtext to the film. In fact, some have gone as far as to call it Brexit ‘propaganda’.

Of course, it’s nothing of the sort, but the film can be read as a metaphor for Brexit, and pleasingly (distressingly to the Woke) it’s pro not anti. Downton Abbey is Britain; the royal staff (including a supercilious French chef) taking over the place are the EU and the Downton staff who decide to rebel and frustrate the dictatorial interlopers are the British people or democracy generally. This may seem a stretch, but Fellowes is on record as a Brexiteer, calling it ‘a great opportunity’. It is this positivity or, at the least, steadfastness when facing challenges (in the film, keeping Downton Abbey functioning as the local manor house), that seems to have most irritated the lefty Brexit doom-mongers. It is notable that there is not a hint of class warfare in the film. In fact it is explicitly mocked. Maggie Smith’s Violet is asked if she felt any effects of the 1926 general strike and she replies, ‘Yes, my maid was rather curt with me, but she IS a Communist…’ This valuing of national unity and an understanding that Brexit is not about politics or economics as much as the laudably independent spirit of what Churchill called ‘this Island nation’, makes this film unique in current popular entertainment.

As the lights went up and I made for the limo waiting to take me to the Dorchester, it could have been my imagination, but the aristos at my sides looked just a little less wasted.

The Battle of the Cadenheads – Benrinnes 18yo vs Benrinnes 23yo