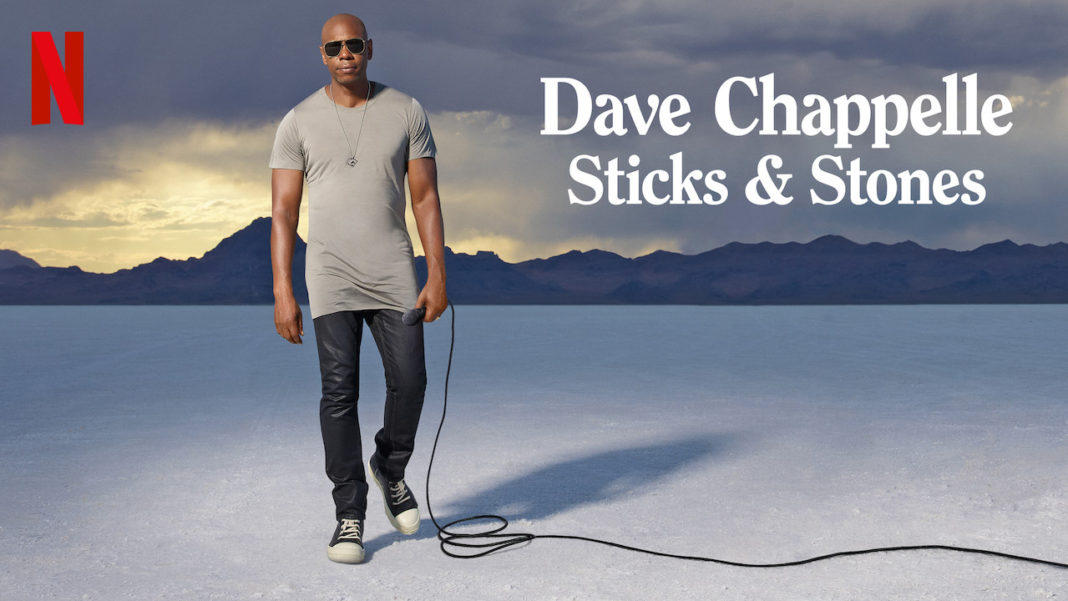 When a comedian opens with jokes about Anthony Bourdain’s suicide, you know the show ain’t going to be no safe space. Dave Chappelle’s Sticks and Stones is about as un-safe a space for modern audiences as could be imagined. For just over an hour, Chappelle pokes sticks at almost every modern taboo imaginable, from “MeToo” to gun culture and the opioid crisis. In that respect, Sticks and Stones is as much a public service as a comedy show.

Of course, almost all comedians these days seem to imagine that they’re on some kind of crusade. The only problem is, not only are they invariably peddling the worst kind of hateful “woke” politics, they’re just not funny. Yes, I’m looking at you, Hannah Gadsby. While critics thought that a fat, grumpy lesbian complaining for an hour about how miserable she is, and how we’re all horrible bigots, was the funniest comedy of all time, audiences have yawned in droves.

On the other hand, not only is Dave Chappelle screamingly funny, but at the end of Sticks and Stones, I still have no real idea what his personal political convictions are – only that he clearly believes in free speech (which, despite the frantic gibbering of some, infinitely less funny “comedians”, is a politically neutral virtue).

In fact, Chappelle seems to have made it his mission to offend everybody he possibly can, with Sticks and Stones. You can generally tell who he’s pissing off at any given time by noting who’s not laughing. In one of the best set-ups of the show, Chappelle trots out the standard pro-choice rhetoric on abortion, eliciting a barrage of whoops and hollers of approval from female voices. Then, with perfect timing, he turns around and delivers one of the best lines of the show: I also believe that if you decide to have the baby, a man should not have to pay. That is fair. If you can kill this motherfucker, I can at least abandon ’em – my money, my choice.

At which point, the men roar with laughter and the women almost uniformly fall into sullen silence. Perfect setup and execution.

Not all the show is quite so perfect, of course. There are a few flat spots, especially in the early minutes – or is that just the points where Chappelle was pissing me off? Quite likely – and that’s kind of the point. The “lesson” of Sticks and Stones is, in Stephen Fry’s memorable retort about being “offended”: “Well, so fucking what?” In one of the pin-drop moments of the show, Chappelle directly challenges the audience to reject the odious “call-out culture” that is crippling modern comedy, as it is almost every facet of the public sphere.

Announcing that he’s going to do an impression, Chappelle challenges the audience (in the theatre, but by extension, us watching at home) to guess who it is. Uh, duh. Hey! Durr! If you do anything wrong in your life, duh, and I find out about it, I’m gonna try to take everything away from you, and I don’t care when I find out. A few beats later, Chappelle delivers the whammy: That’s YOU! That’s what the audience sounds like to me….Ugh. I’m goddamn sick of it. Cue uncomfortable titters.

From there, Chappelle segues into a monologue on Kevin Hart – “just four tweets short of being perfect” – and the unwritten showbiz rule that You are never, ever, allowed to upset… the alphabet people. You know who I mean.

Then there are the jokes about celebrity paedophilia that are the most squirmingly uncomfortable you’ll hear – and the drop-dead funniest. And proving that satire is the deadliest art of all, Chappelle has made sure that a certain hate-crime-hoaxing “French actor” will be forever laughed at as “Juicy Smolliere”.

While plenty of comedians have complained about “woke” political-correctness killing comedy, Dave Chappelle has actually gone and put his balls on the line in the fight for free expression. Maybe he won’t get invited to any polite Hollywood dinner parties for a good long while, but he’s not only landed a killer blow in the culture wars, he’s delivered one of the funniest stand-up shows you’ll see for a long time.