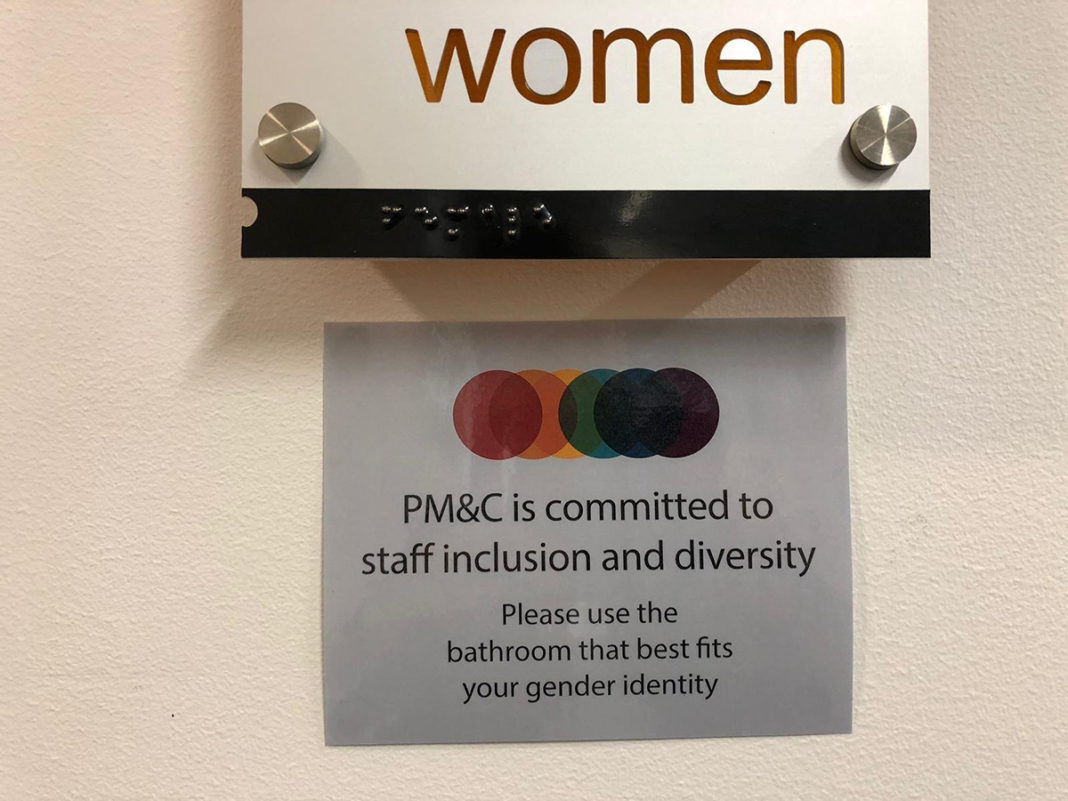 A few years ago, Australia’s Department of Finance was widely derided for its risible YouTube recruitment ad, “The Game Changers”. But, while the ad was deservedly mocked for being cringey and awkward, it’s also a very telling insight into the Canberra Public Service bubble.

While the ‘actors’ might look like a casting-call from Diversity Central, these are actual public servants. So, as they swan around swanky offices and babble about ‘paleo banana bread’ and ‘Aboriginal and Torres Strait Islanders staff network meetings’, remember: this is how the public service actually thinks.

So it’s no surprise to discover that public servants are taking it on themselves to go behind even the PM’s back to impose faddish ‘gender theory’ bullshit. But Scott Morrison is having none of it.

Scott Morrison has slammed bathroom signs telling Prime Minister and Cabinet staff to use the toilet which best suits their gender identity, and told mandarins to take them down.

Signs in the Barton offices of the Department of Prime Minister and Cabinet have been widely ridiculed after Nine Network political editor Chris Uhlmann tweeted a photo of them.

“PM&C is committed to staff inclusion and diversity,” the PM&C bathroom sign reads.

“Please use the bathroom that best fits your gender identity.”

In case the unelected public service has forgotten or ever cared, this is exactly the sort of ‘progressive’ nonsense that was roundly rejected by Australian voters just a few months ago. Morrison is quickly putting the ‘game changers’ back in their box.

The Prime Minister labelled the bathroom signs “political correctness over the top” and he has told officials in his department to take the gender identity notes down.

“It was brought my attention […] this is why we call it the Canberra bubble,” he told Sydney’s 2GB radio.

“It’s ridiculous. It’ll be sorted out […] I don’t think this is necessary, it’s over the top. You don’t need to do this stuff, it’s just political correctness over the top.”

When asked if the signs would be removed from the PM&C bathrooms, Mr Morrison said: “That’s what I expect.”

This isn’t the first time the PM has had a run-in with his staff.

Mr Morrison has clashed with his Canberra department before. PM&C staff were forced to apologise earlier this year when they photoshopped the shoes Mr Morrison was wearing in his official website portrait.

While a kerfuffle over a dunny sign might seem trivial enough, and just another ‘Canberra’ joke, in its own way it is emblematic of the wider culture war. No matter what the Australian population actually want, cadres of unelected public servants are determined to impose their elite, ‘progressive’ vision on all of us. Morrison has already hit back at ‘gender whisperers’, and set up an investigation into ‘transgender’ clinics mutilating children. Australia needs more politicians with the mongrel to put the elites back in their box.

BFD Weekender: What Actually is Populism? And Why Does it Have a BAD Reputation?

Morrison Is Not Rolling Over for the Krazy Klimate Kult

BFD Weekender: An Undercover Journey Into the Heart of Madness

Chinese Virus Outbreak. Only Surprise Is It Didn’t Happen Sooner.

BFD Weekender: Why Are People Who Use Illegal Drugs Demonized?

BFD Weekender: What Actually is Populism? And Why Does it Have a BAD Reputation?

What They Promised vs What They Delivered: Part Five

Satire Sunday: Israel and All That Stuff

PROTECT Our People From Wuhan Coronavirus

We criticise Jacinda and her government continually for performing badly, or not performing at all - think Kiwibuild, mental health, child...
Read more

The Taxpayer's Union has revealed that the government is funding astrology amongst other alternative and non-scientific practices.
Read more